In these 20 years completed on December 1st, the subsidiary of LEWA installed in Diadema, SP, Brazil has established the technological references in process pumps and metering systems in the continent. During this time, the company has demonstrated the values ​​of accuracy and transparency of its headquarter in Germany, while successfully overcomes the challenges and instabilities of the region.

Metering, injection and transfer of fluids has always been an activity for specialists. LEWA always had an excellent reputation in this area but lacked local presence. This changed on the 1st of December 1997, when Herbert Ott, founder and owner of the Group, opened a branch in Brazil. Over the next few years, the company would commercialize pumps and systems for complex processes in different applications. This was especially appealing to demanding customers in the process industry and oil and gas, where LEWA concentrated most of its efforts.

Since the beginning, LEWA's South American operation has provided the state-of-the-art in metering and diaphragm process pumps, such as the patented sandwich multilayer diaphragm with rupture monitor: monitoring reliably detects any damage to a layer of the diaphragm. Due to the two layers of the sandwich diaphragm, the operator does not need to replace it immediately after damage; the pump does not leak and production may continue for a limited period of time. Replacement can then be scheduled for an upcoming opportunity, which ensures high system availability. Based on the unique characteristics of its pumps, LEWA then went on to design and build custom equipment for local market requirements.

In 2002, the company delivered the first gas odorization unit built in Brazil, which still operates in the Capuava petrochemical complex odorizing liquefied petroleum gas (LPG). In 2005, it was the turn of the first chemical injection system for offshore application, installed in Campo de Mexilhão, in the Santos Basin. A 25 ton system with multi-compartment tank for injection of inhibitors at 120 bar pressure. In 2013, the company delivered the largest system it has ever built in South America: a 45 ton equipment with 46 chemical injection pumps. Even today, the company has been setting new technological milestones, such as the largest pump ever assembled by the company in Brazil, a 10 ton equipment to inject 5,000 kg/h of vinyl acetate at more than 300 bar pressure in the Petrochemical Complex of Camaçari, in Bahia.

These developments, added to the thousands of pumps and systems of diverse sizes already delivered in the region, emphasize the central objective of LEWA: to be the specialist in the reliable and still economical handling of critical fluids.

Since LEWA became part of the Japanese Nikkiso conglomerate's Industrial Division in 2009, the company has benefited in a number of areas: “By being part of a publicly traded group (Nikkiso has shares in Tokyo stock exchange), LEWA adopts international standards of management and transparency. In addition, Nikkiso canned motor pumps are part of the LEWA product portfolio in the region. And who benefits from this are our customers”, adds Vanessa Dessimoni, General Director of the company in Brazil.

Today, LEWA's South American operation is one of the leaders in fluid handling expertise, particularly in critical processes and applications with high demands on safety in chemistry, oil and gas, pharmaceutical and food and beverage industry. With 18 representative offices, clients can find cooperation partners throughout all countries in the region. 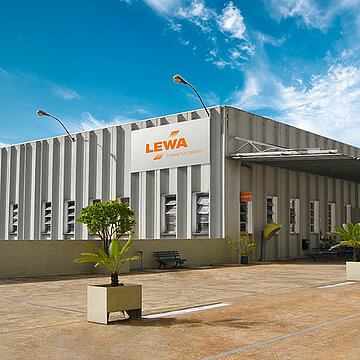